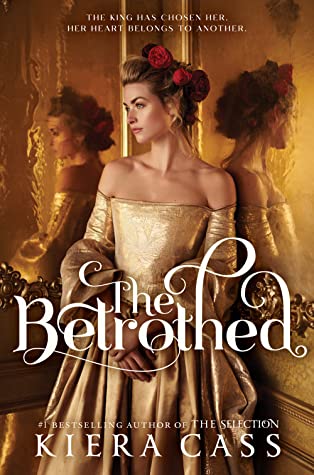 When King Jameson declares his love for Lady Hollis Brite, Hollis is shocked—and thrilled. After all, she’s grown up at Keresken Castle, vying for the king’s attention alongside other daughters of the nobility. Capturing his heart is a dream come true.

But Hollis soon realizes that falling in love with a king and being crowned queen may not be the happily ever after she thought it would be. And when she meets a commoner with the mysterious power to see right into her heart, she finds that the future she really wants is one that she never thought to imagine. (Goodreads)

This book. Oh boy… I am conflicted.

I was excited when I heard about this book as a fan of the Selection series. I didn’t wait long to buy it, nor did I let it sit on my shelf long without being read. Much like my experiences with her other books, I was able to read this one in a single sitting. I’ve never been one to consider this a bad thing; some of my most favourite books are ones that can be read in a single sitting. The writing is easy to understand and subsequently easy to follow. For me, the only issue was reading the names of the countries, primarily the main setting of Coroa; which I continually read as “Corea.” This is a common issue I have with fictional names, but in the instance I found it relatively impossible to ignore. It would occasionally pull my out of the story– well, that amongst other things.

To be honest, story doesn’t seem like the best word to describe this book. The book uses the majority of its length setting up the relationship between our protagonist Hollis and the king Jameson, only for it to shortly be forgotten in favour of the more dramatic forbidden romance between her and the exiled Isolten Silas. Almost as soon as that romance begins it ends with little actual detail regarding their relationship (which is practically non-existent and baseless). This felt like a slap in the face, having been promised a romance and to get very little between the end-game couple. This negatively affected their relationship as it seemed to be based on very little and disingenuous “insta-love.” It detracted from what was intended to be a shocking and powerful climax. At the end of the day, the story of Hollis’s rise to the royalty seemed much more interesting.

I am thoroughly bothered by how hard Hollis was made to work to be a good queen and all her (albeit mild) political and diplomatic accomplishments, only to throw this away shortly after for the sake of idealistic romance. The story began with a relatively realistic view of royalty and barely managed to end with any sort of substance.

There are parts of me that enjoyed sections of the story. Primarily whenever the protagonist showed some sort of agency; but for the most part she seemed to follow in the Selection’s protagonist shoes as an unintentional self-insert type of character rather than an actual person (also, America was a more developed character in some ways).

Ah– I don’t know… Part of me is considering reading the next book, based solely on the fact that I’m curious as to how the author is going to conclude this duology. The only thing I know with certainty is that I am not going to purchase the book.