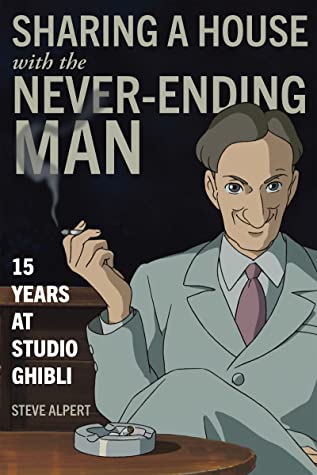 This highly entertaining business memoir describes what it was like to work for Japan’s premiere animation studio, Studio Ghibli, and its reigning genius Hayao Miyazaki. Steve Alpert, a Japanese-speaking American, was the “resident foreigner” in the offices of Ghibli and its parent Tokuma Shoten and played a central role when Miyazaki’s films were starting to take off in international markets. Alpert describes hauling heavy film canisters of Princess Mononoke to Russia and California, experiencing a screaming Harvey Weinstein, dealing with Disney marketers, and then triumphantly attending glittering galas celebrating the Oscar-winning Spirited Away.

His one-of-a-kind portraits of Miyazaki and long-time producer Toshio Suzuki, and of sly, gruff, and brilliant businessman Yasuyoshi Tokuma, capture the hard work and artistry that have made Ghibli films synonymous with cinematic excellence. And as the lone gaijin in a demanding company run by some of the most famous and influential people in modern Japan, Steve Alpert tackles his own challenges of language and culture. No one else could have written this book. (Goodreads)

Special thanks to Netgalley and Stone Bridge Press for providing me with an eARC of this novel.

I am a big fan of movies. Of course, I review them and try to watch a new one everyday. Studio Ghibli is one of those animation houses that if it is even somehow associated with a film, I’m going to watch said film. Sharing a House with the Never-Ending Man can immediately be deemed essential reading for fans of both Studio Ghibli and film in general.

The novel is told primarily through a series of anecdotes which provide a rare view into the inner workings of the Japanese film industry in the ‘90s. The author, being a gaijin (or foreigner), allows him to provide an understandable view of the differences in industry for a western audience. As a reader, you learn a lot about the business end of bringing Japanese films to the Western world, and the many hurdles the companies involved have to go through to ensure the success of the film. We also see an unadulterated view of the reality of working in a Japanese company in the ‘90s, which differs greatly from one might expect.

In mentioning the unadulterated view of working in Japan during this particular decade, I want to note that there are problematic aspects to the story. I understand how these aspects can detract from the story for some, because at times there are things that are hard to read. Whether it affects your reading or not, it’s important to address that there are things in this book that may not have been necessary to add.