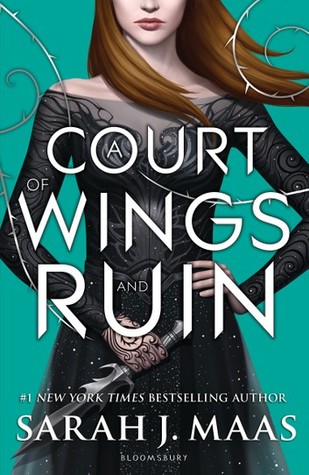 Available on Amazon, B&N, and Libby

Looming war threatens all Feyre holds dear in the third volume of the #1 New York Times bestselling A Court of Thorns and Roses series.

Feyre has returned to the Spring Court, determined to gather information on Tamlin’s manoeuvrings and the invading king threatening to bring Prythian to its knees. But to do so she must play a deadly game of deceit – and one slip may spell doom not only for Feyre, but for her world as well.

As war bears down upon them all, Feyre must decide who to trust amongst the dazzling and lethal High Lords – and hunt for allies in unexpected places.

In this thrilling third book in the #1 New York Times bestselling series from Sarah J. Maas, the earth will be painted red as mighty armies grapple for power over the one thing that could destroy them all. (Goodreads)

While I totally love the A Court of Thorns and Roses series, A Court of Wings and Ruin was honestly the hardest for me to get through. I initially began reading it early in the year only to put it down around chapter thirty-something. Later in the year, I picked it back up, this time with the intent of finishing it. I don’t think it was an issue of as to whether I was going to finish it, but when. With Maas’ writing, I tend to get so utterly engulfed in what’s going on that I sometimes have to set the book down solely to recover emotionally from the events of the story. And let me tell you, A Court of Wings and Ruin is an intense read that had me going through a rollercoaster of emotions. By the end of the book, I had laughed and sobbed. It was simply… a lot.

A Court of Thorns and Roses is one of those series that is book bad and good in ways that are almost impossible for me to articulate. You can spend a lot of time picking them apart, but you can spend just as much time praising them. Really, I can’t tell you where this series is for you, because of how polarizing it is. All I can say is that its 1000% for me.

Read the first book, if you enjoy it, or at the very least have mixed feeling read the second. If you like the second you are guaranteed to like the third.