Two young Americans with special abilities must race to find a girl in Hong Kong before a shadowy government organization called the Division does. (IMDb)

While idly searching through Hulu I came across this film and almost immediately remembered watching it many times over when I was younger. It has been many years since I’ve seen, but I remembered it fondly. After re-watching it recently I had one of those moments where I look back at younger me and wonder what the heck was going on?

This film definitely takes a stylistic approach to its cinematography that works in its favour. Through camera work and editing, the tone of the film is established early on, and the intention of the film is evident. You can see what they were trying to do, which is part of what makes it so sad that they struggle to follow through. For me, this was the primary aspect of the film that allowed me to sit through it in its entirety. With lacklustre acting and poor writing, this film heavily relies on its cinematography.

The writing in this film is not entirely horrendous but is nowhere near good. The film is a mish-mash of ideas that are related enough that they could be done together but only with the right writers up to the task. The concept is great, but heartbreakingly poorly executed.

The thing that really tanks this film for me is the fact that it doesn’t feel done. And it doesn’t feel done because it isn’t. You can blatantly tell there were intentions on making a sequel that never came into fruition. Sadly, the creators relied too heavily on the thought that this film would be a success; this choice actually playing a huge roll in the film failing. At the end of the film, you’re left with so many loose ends that you can’t even say the film has a proper ending. At best, we just got the first half of a painstakingly long film.

While this film is watchable I think there are better ways to spend your time. If you are a fan of the comics from which it is based, I would probably stick to the reading.

A detective investigates the death of a patriarch of an eccentric, combative family. (IMDb)

For the month of December, I decided to choose books and films that seem to be relevant to this time of year. And what better film to watch with your family that Knives Out. A scarily accurate depiction of the modern family dynamic.

I had high expectations going into this film after reading The Inheritance Games and seeing many fellow reviewers compare it to this film. Taking a look at the cast only confirms that this film was set up to succeed. We don’t get many cat-and-mouse type mysteries anymore, nor do we get such satisfactory plot twists. This film calls back to an era of noir films that have struggled to be revived in the modern era focused on hyper-energetic action flicks. This film finds a balance between the older methods of storytelling and the newer aesthetic of cinema.

Daniel Craig appears as a Sherlock-eque private investigator trying to figure out the true circumstances of the unexpected suicide of an eccentric, and grossly-wealthy author. It goes without saying that this is one of those films you watch more than once. Not just because its a thrilling story, but because it will likely require multiple viewings to catch all the minute details strewn throughout. With a keen eye, like Craig’s Blanc, you can see the whole scenario come together with electric clarity.

If you love a good whodunnit story, Knives Out is one of the best to come out in recent years. Boasting a talented cast with great chemistry. The film will make you think of your own families eccentricities, especially if they were put under similar circumstances. 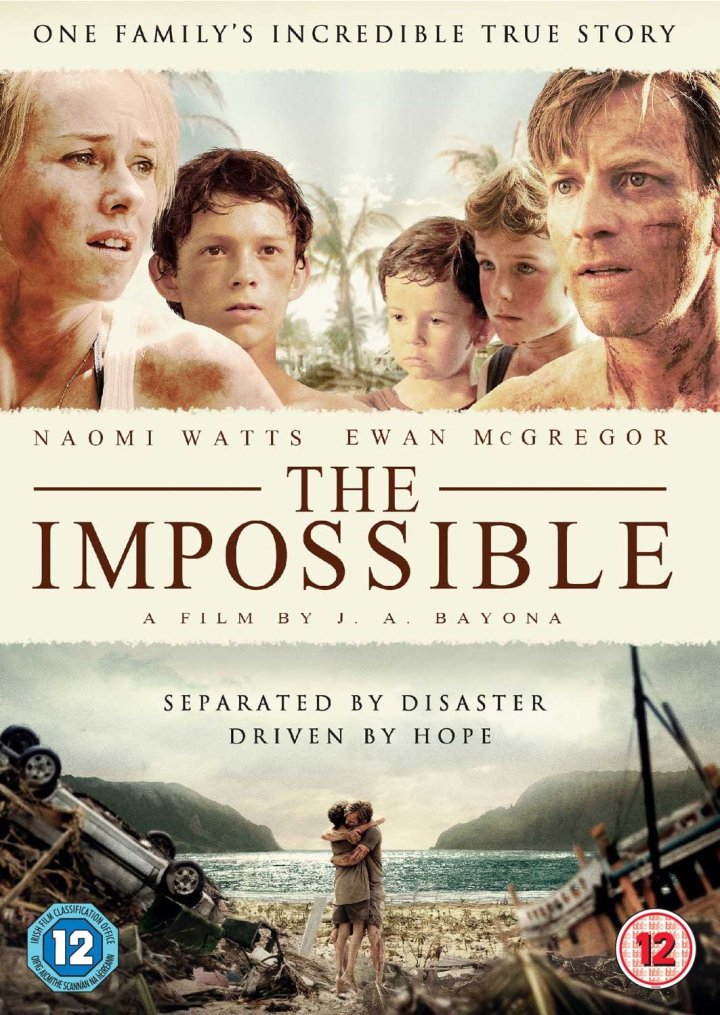 The story of a tourist family in Thailand caught in the destruction and chaotic aftermath of the 2004 Indian Ocean Tsunami. (IMDb)

This movie came out quite a long time ago and it wasn’t until around 2018 that I got the chance to watch it for the first time. I’ve watched it at least four times since. When I found myself browning Netflix for something to watch one evening I was pleasantly surprised to see that The Impossible was streaming; and not only was it streaming, but it was in Netflix’s top ten. If I recall correctly it was number two! It’s a really exciting thing to see more people watching what is otherwise a hidden gem. And did I mention an absolutely adorable baby Tom Holland is in this film?

The Impossible is one of those truly terrifying thrillers that doesn’t have to work hard to get you on the edge of your seat. In addition to being based on true events, the amazing acting of the cast doesn’t struggle to make you forget you’re just watching a movie. The film is practically held solely on the back of Naomi Watts and a young Tom Holland. Together they set the tone of the film, that is later carried on by and enhanced by McGregor.

The film is well executed with a handful of shots near iconic. Additionally, the anxiety and horror of the sudden destructive power of tsunami are depicted in the shots just as well as through the actors’ performances. You see just how quickly a natural disaster can come and turn your life upside down.

I recommend this film, but be aware that it’s probably not for the faint of heart. This film holds little back in its depiction of a natural disaster, making it a hard film to watch for some. If you feel you can handle it, I highly recommend it.

A sixteen-year-old girl who was raised by her father to be the perfect assassin is dispatched on a mission across Europe, tracked by a ruthless intelligence agent and her operatives. (IMDb)

I recently became interested in rewatching Hanna after learning about the show. I’m quite tempted to watch– the show– but would feel wrong in doing so without first rewatching the original film. The film is very much how I remembered it.

The film is very well faceted, especially by Saoirse Ronan, with an interesting story and well-choreographed action. At the time of its release, I feel it was much more original that it comes across as now, a sad downfall for many older films. If there is one thing to truly highlight in this film it would be Ronan’s performance. Ronan is one of the best things about this film, which is not surprising considering her current Hollywood status. I do believe Ms Ronan has what it takes to be the next Streep or Andrews.

My main criticisms come from the fact the film hasn’t aged well, even for it barely being ten years old. The audio is very pre-2010 cinema and the film utilizes certain stylistic editing techniques long retired.

If you haven’t seen the movie but are currently watching, or considering watching, the show please consider giving the film a chance. You won’t regret it.

Available on Hulu and HBO Max

A cyborg uses her prodigious fighting skills to take on corrupt authorities in a future dystopia. (Hulu)

It’s not every day that a film introduces its titular character in what may very well be their lowest of lows. When we are introduced to the cyborg Alita she is, for all intents and purposes, long discarded trash. Regardless of this her brain, as well as her core power source, are still in prime condition. It takes the work of one Dr. Ido to restore her into working order. With a new body and new life, Alita, who remembers nothing, is forced to adjust to her new surroundings while trying to remember her obscure past. Dr. Ido, who becomes a father figure to Alita, and a young man named Hugo, her love interest, help her along the way.

I didn’t know what to expect from a movie based off of a manga, let alone a film based on such an extensive and well-written manga. When the trailer first came out, I must admit I was concerned; especially since it follows the disappointing 2017 Ghost in Shell adaption. Like most viewers, I was taken aback by Miss Salazar’s exaggerated eyes. When first exposed to the imagery, I admit that the effects of the uncanny valley were strong. This detail can be somewhat ignored after you take into consideration that the manga makes a point to give Alita exaggerated features, though, if I recall it was originally her “large” lips. This detail would prove to be the only character design decision I found myself continuously questioning.

My main qualm with the film is that there were often times the CGI was poorly executed. As a result, there were scenes in which I found myself being pulled out of the film, solely due to the poor integration of computer-generated backgrounds with the live-action actors. Additionally, the digital augmentation of Alita’s face often came off as awkward, most notably in the scene in which she tries chocolate for the first time. Otherwise, the film was beautiful and fully embraced the cyberpunk aesthetic.

For the most part, I have minimal complaints with the film. I was pleasantly surprised by the character development as well as the overall execution. I wouldn’t call the film your run-of-the-mill origin story. For what it’s trying to achieve in regards to its source material, I would call it successful. Many may say there isn’t really a plot, but as a introductory film to a potential franchise, the film gets the job done. I thoroughly enjoyed the film, which was not what I expected. 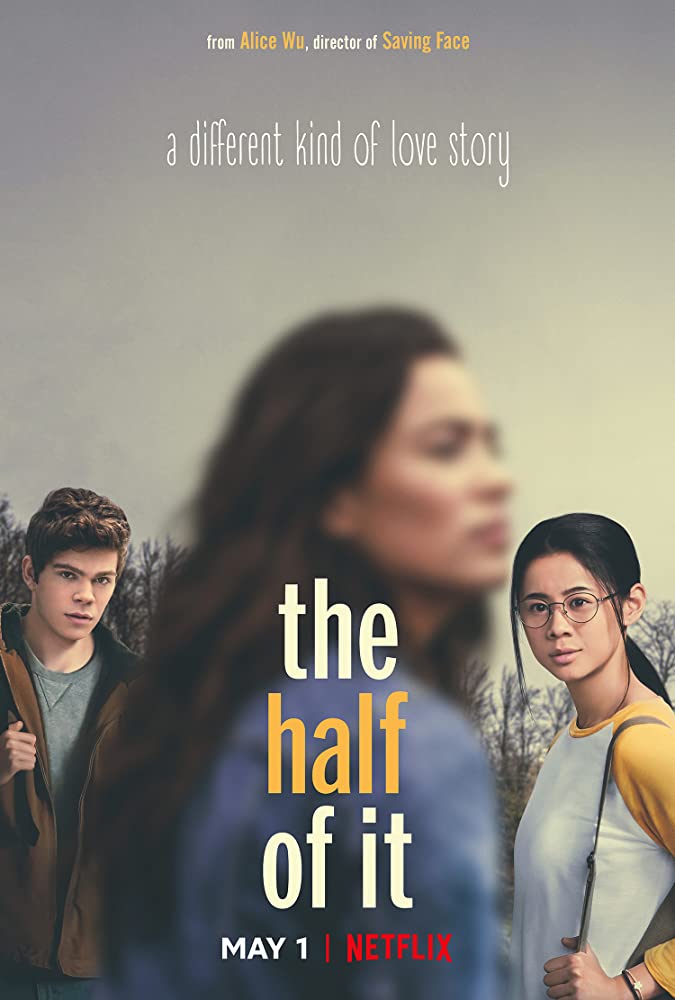 She’s a gifted introvert. He’s a sweet jock. Both are smitten with the same girl. Friendships– and first loves– can be complicated. (Netflix)

In my opinion there hasn’t been a teen movie that falls among the ranks of the classics for quite a while, but The Half of It might just fit the bill. Not only does the film include relatable romance, but it has an emphasis on friendship and platonic love, something we honestly need more of in both film and books.

The film is a heartwarming examination of friendship and young love, as well as the struggles of immigrants, their children, and LGBT youth (especially in the midwest). It vividly illustrates the growth of romantic and platonic love on a number of levels, something we don’t often see in teen films. The film avoids the cliche of the relationships in the film becoming diluted by an overdone love-triangle. Rather we watch the blooming romance between two people, and the growth of a close friendship. Romance takes the back seat to the emphasis on friendship, which is exceptionally refreshing. And with the addition of including the struggles of the film’s protagonist as an immigrant only adds a realistic depth to the film. For viewers who immigrated to the States at a young age, as well as viewers whose parents are immigrants, the main character is exceptionally relatable.